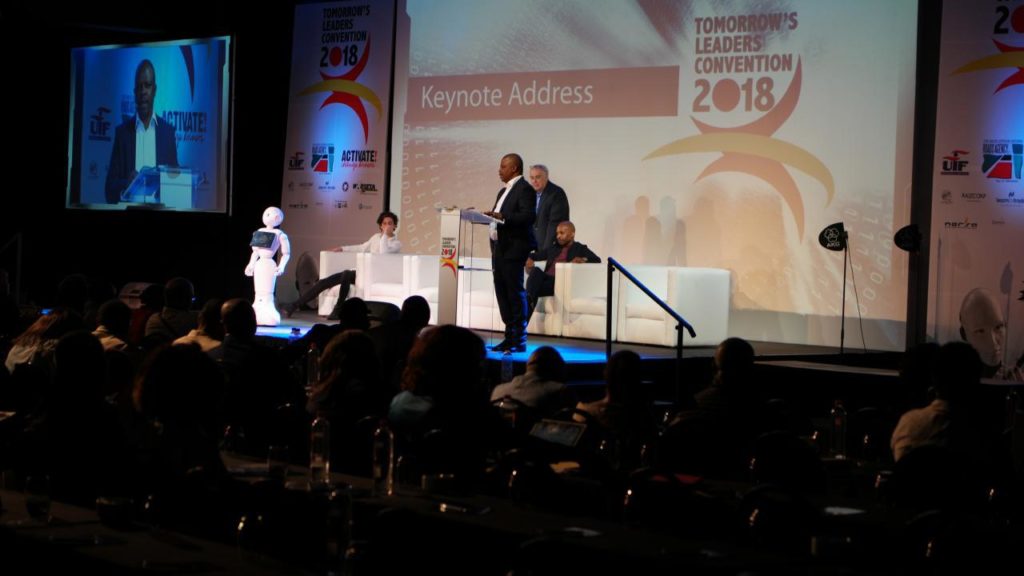 Ladies and gentleman, esteemed guests the future is now, it is cloaked in the fourth industrial revolution. The pleasure, privilege and excitement of sharing this platform with yourselves today is nothing short of overwhelming, If I get agitated please bare with me, it will be for no other reason but the anxiety to catapult into the future of the future.

Having said that, been agitated is nothing uncommon at least to myself. When I was in my mid to late twenties I was baptized with fire and thrown into the deep end of the coalface of service delivery in the country. Back then in the late nineties I was envisioning the 4th Industrial revolution, championing and demanding modern ways of delivering services. Unfortunately, I had no patience to contend with stagnation.

The moral of the story of my baptism of fire is threefold, Firstly, innovation, modernization, trailblazing the future is naturally a terrain of the young and gifted. Secondly society at large is averse to unchartered waters. Thirdly change and modernization is viewed with suspicion by the believing unbelievers. Therefore, those of you who aspire to change the world you have a tall order, however nothing unsurmountable. You have choice of been the Prince or Machiavelli.

Our economy is pigeon-holed by weak economic growth, high unemployment and an increasing in-equality. The outlook for the economy has darkened precipitously in the past couple years. The current leadership of the economic cluster across government and private sector, are in denial about their in-ability to take us out of the quagmire.

The political economy of South Africa portends a country at crossroads. At the core of the discontent is the political economic system characterized by the pernicious confluence of power, politics and economic interest. The modus operadi is to leverage political power through cabinet, parliament and other political institutions in pursuance of selfish economic interest. As a result the rich, powerful and politically connected elite is getting richer, while the un-employed and poor are rapidly drifting into deeper poverty traps.

Key players are the rich economic elites, the power elite, politicians and the anointed aspirant black capitalist, this are the so called top one percent. As articulated by Andres Solimano “ The top 1% percent control key levers of the economy such as technology, finance, telecommunications, media and energy. Their influence is beyond the realm of the economy, it extends to the spheres of arts, culture, ideas and politics. Due to their dominance of the mass media, (tv, newspapers, radio networks) they control the dissemination of information, knowledge, cultural content that shape social behavior and political views”.

Disruptive innovation may have been born on Silicon Valley and coined in Boston, but it has now spread to every corner of the world and extend to every industry and the political sphere. It behooves us all to catch up with the breakneck pace of innovation and push the boundaries of industry definitions and human imagination. There is a big premium placed on business creativity, human empathy and speed.

The 4th Industrial revolution presents a conundrum to humanity. We can use it to befit humanity otherwise it can overtake us. In one of my publishers note to the leadership magazine I contended

“To deny the rapid takeover of human capability by the Algorithms is frankly to be delusional. Algorithms might rob us of most of our unique human qualities such intelligence, taste, style, the ability to love and have compassion, be creative, memory and others. What will be left of us, is our SOUL. The rapid advance of algorithms and artificial intelligence implies that human will increasingly be at the mercy of technology and whoever controls it”.

I further posit that “Could it be that with the passing of time, technology will go beyond the physical and material into mortal and acquiring a Soul ?”

On behalf of the Cape Media Corporation and our gracious sponsors, you are welcomed to this convention. I hope this convention will inspire you to either start or propel your journey to be a significant player in the 4th Industrial Revolution.

For those of you who are young, spirited, energetic with the resolve to change the world, be warned, trailblazing the future is lonely, you could be easily isolated and declared a looney. The apple advert of 1998 bears testimony to this …it reads

“Here’s to the crazy ones.
The misfits.
The rebels.
The troublemakers.
The round pegs in the square holes.
The ones who see things differently.
They’re not fond of rules.
And they have no respect for the status quo.
You can quote them, disagree with them, glorify or vilify them.
About the only thing you can’t do is ignore them.
Because they change things.
They push the human race forward.
While some see them as the crazy ones, we see genius.
Because the people who are crazy enough to think
they can change the world, are the ones who do”.

I thank you all